This project was my thesis project at my Master's program in Integrated Digital Media at NYU. It was a solo project and I was the Designer, AR Prototyper & Researcher for this project. I created the different Augmented Reality prototypes and experiments to test my hypotheses. I also conducted user interviews with potential users and performed user testing for each experiment.

How can we connect people living in isolation, small spaces and extreme environments to plants and nature?
Background

However, in our current times, with the advancement of technology and thirst for exploration, research and resources, humans have started inhabiting these environments. We have people living in space stations, doing research at research stations in the extreme cold in the polar regions, people living in submarines and exploring the deep sea using submersibles, to remote army outposts in arid deserts and people living and working in isolated nuclear plants and oil rigs.

According to the UN, 55% of the world's population currently lives in urban areas and that figure is expected to grow to 78% by 2050. Urban areas are becoming increasingly dense and that is contributing to a lack of space in the biggest cities worldwide. People are living in smaller apartments and working in cramped offices and workspaces.

To understand the relationship between humans and plants better, I looked into academic research articles and journals and came across the following research:

I created a Google Survey to get a sense of the current interactions people have with nature and plants. I asked people why they kept plants and which environments they had plants in, ie. home, school, work, etc. I also asked them about their experience in extreme environments and if they had lived in closed
confined spaces. There were 32 participants in this survey and I got the following results:

Using all the insights of my research, I decided to create an augmented reality experience which simulates the human-plant relationship for people living in isolation and extreme environments. The experience recreates different kind of indoor plants and overlays them in your current space. The user can pick different plants of their choice and can select where to place them. It also simulates the practice of growing your own plants and taking care of them as they grow. This experience was designed for mobile phones and tablets.

To test various hypotheses of my project, I created 3 different experiments to test with users. I used TorchAR to create quick prototypes and iterations that can be and shared tested rapidly for feedback. The results and feedback of these experiments was then incorporated to create further prototypes:

I created an environment in augmented reality with virtual plants. This experiment was done to test the reaction of people to virtual plants. It was also a test to see if plants can have a calming effect on people. The participants can walk around the plants, move and have a closer look at the plants. This experience is meant to simulate real plants placed around you. Most results confirmed my hypothesis of plants having a calming effect. 78% of the users I tested with were happy with virtual plants and wouldn’t mind having them around in their spaces. 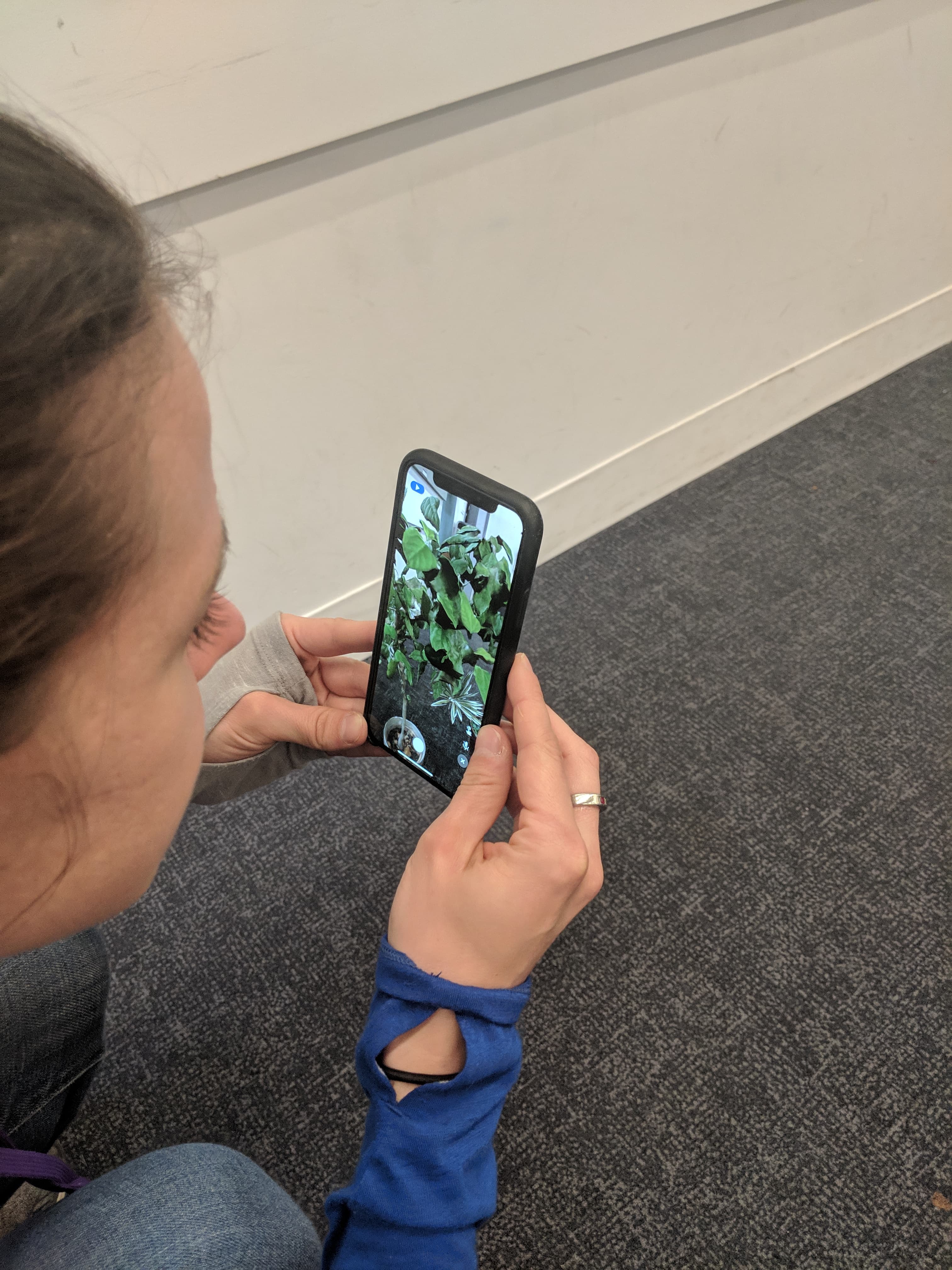 I then conducted an experiment where I simulated the nurture and the act of growing the plant. In contrast to Experiment A, this experiment was a surreal and fantastical compared to the more realistic experience in Experiment A. Experiment B was done to test the effect and experience of growing a virtual plant. Most users responded positively to the experience, noting that they enjoyed it even though it wasn’t the best experience to convey the notion of growing plants. They also wanted to grow more plants and some wanted to see various stages of the plant growth. 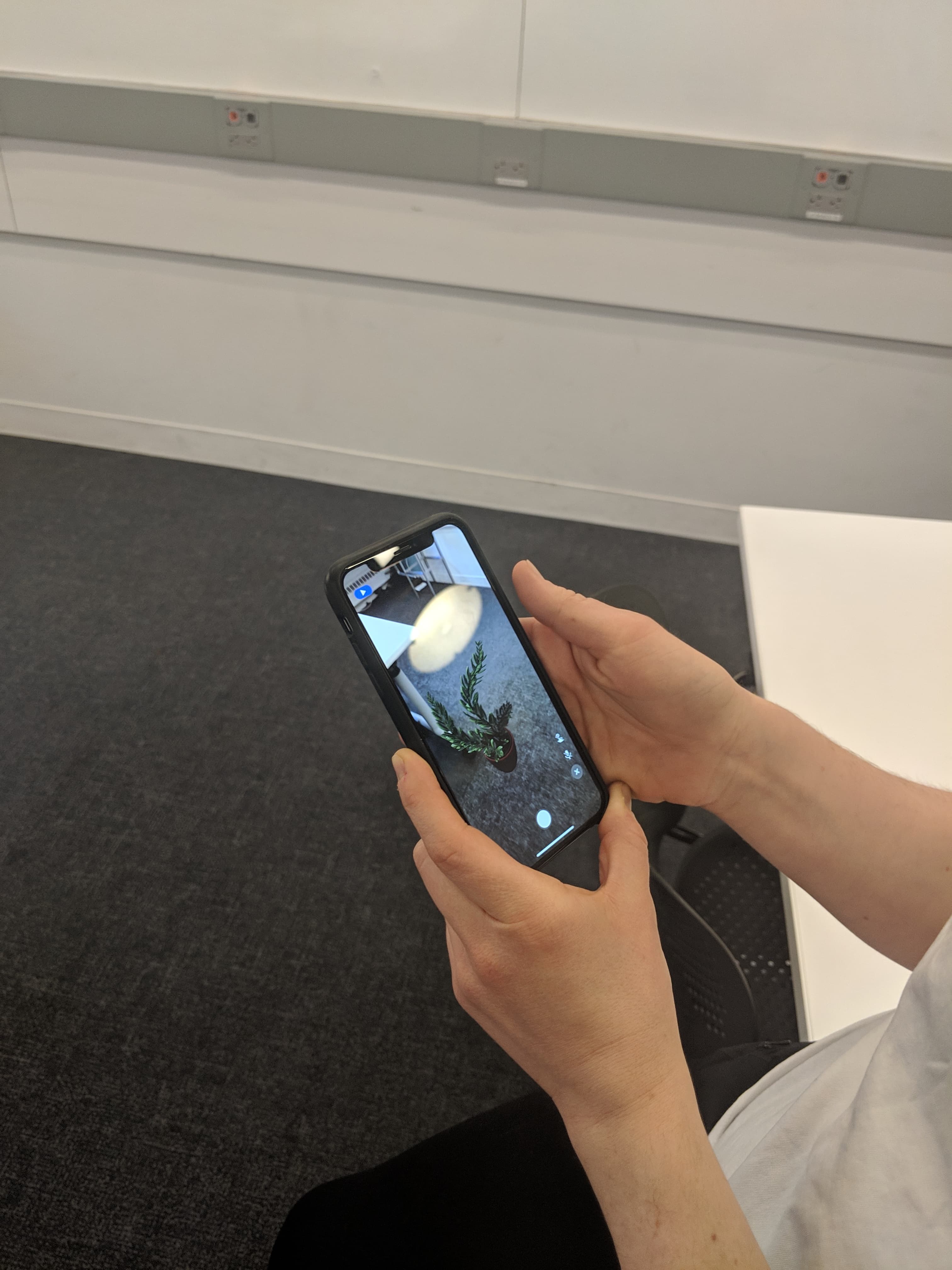 The third experiment I did was to create an AR Card based experience where users can place cards in their personal spaces and environments and customize. This experiment was more playful and interactive and I tested how people felt about using something tangible and physical like the cards and the freedom to place plants where they wanted to. The users liked the marriage of physicality to the simulated experience, but disliked having to use a smaller screen not being able to view it through augmented reality glasses or similar devices. 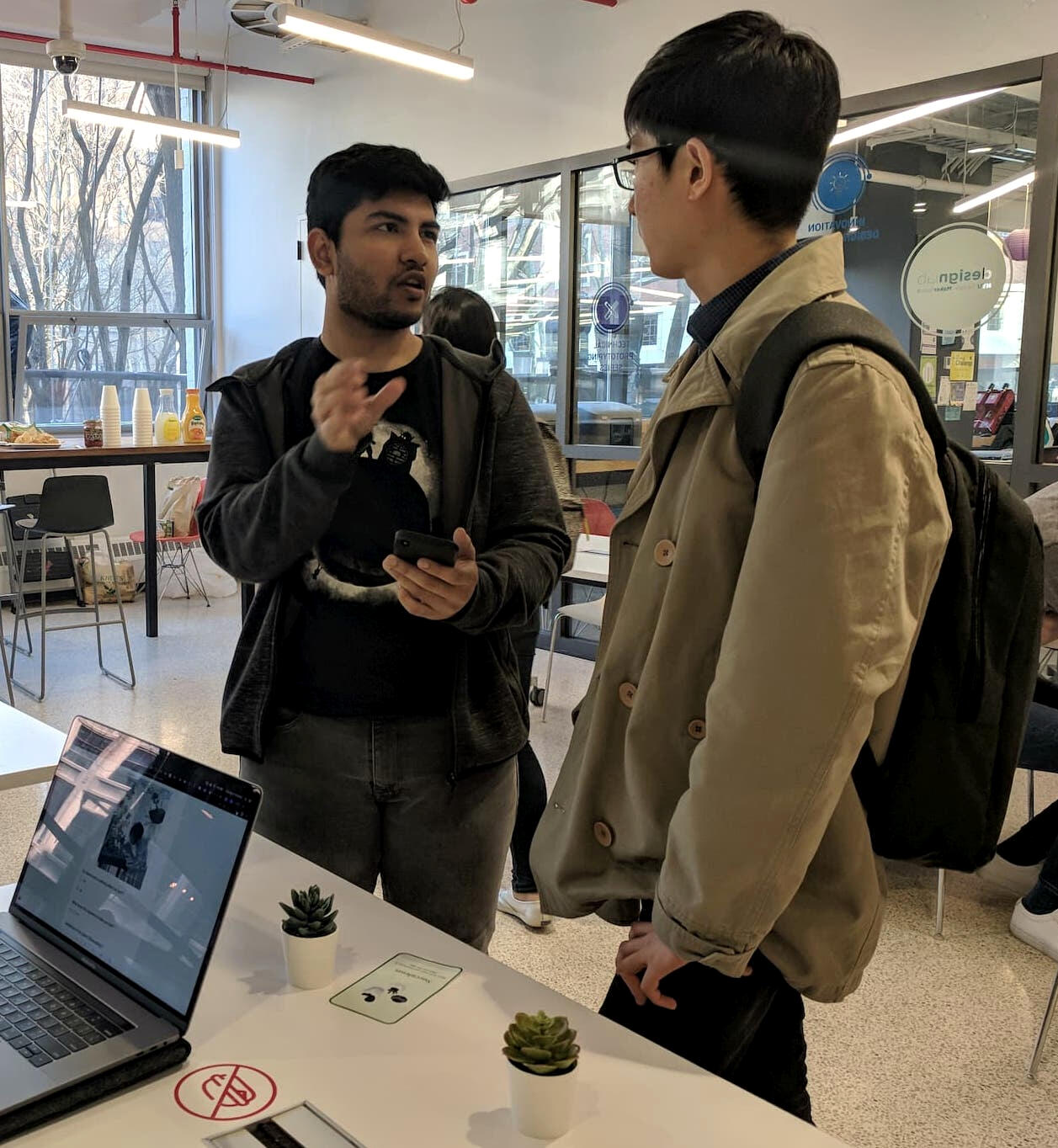 I wasn’t able to test my experiments with people living in isolation due to certain time constraints. I hence decided to experiment and test with users living in urban confined spaces. Experiment A, B & C were conducted with 15,14 and 12 participants respectively. Some of my learnings were:

To showcase the vision I have of my project, I created these concept images that illustrate a future where we would be interacting with simulated plants in our personal spaces. These concept illustrations depict how we might have an evolved relationship with plants in the near future, once spatial computing becomes ubiquitous.

These concept images are speculative and serve as a medium to spark a public discussion about our future with simulated plants, and starting a conversation about the shifting relationship of humans and plants from analog to digital. 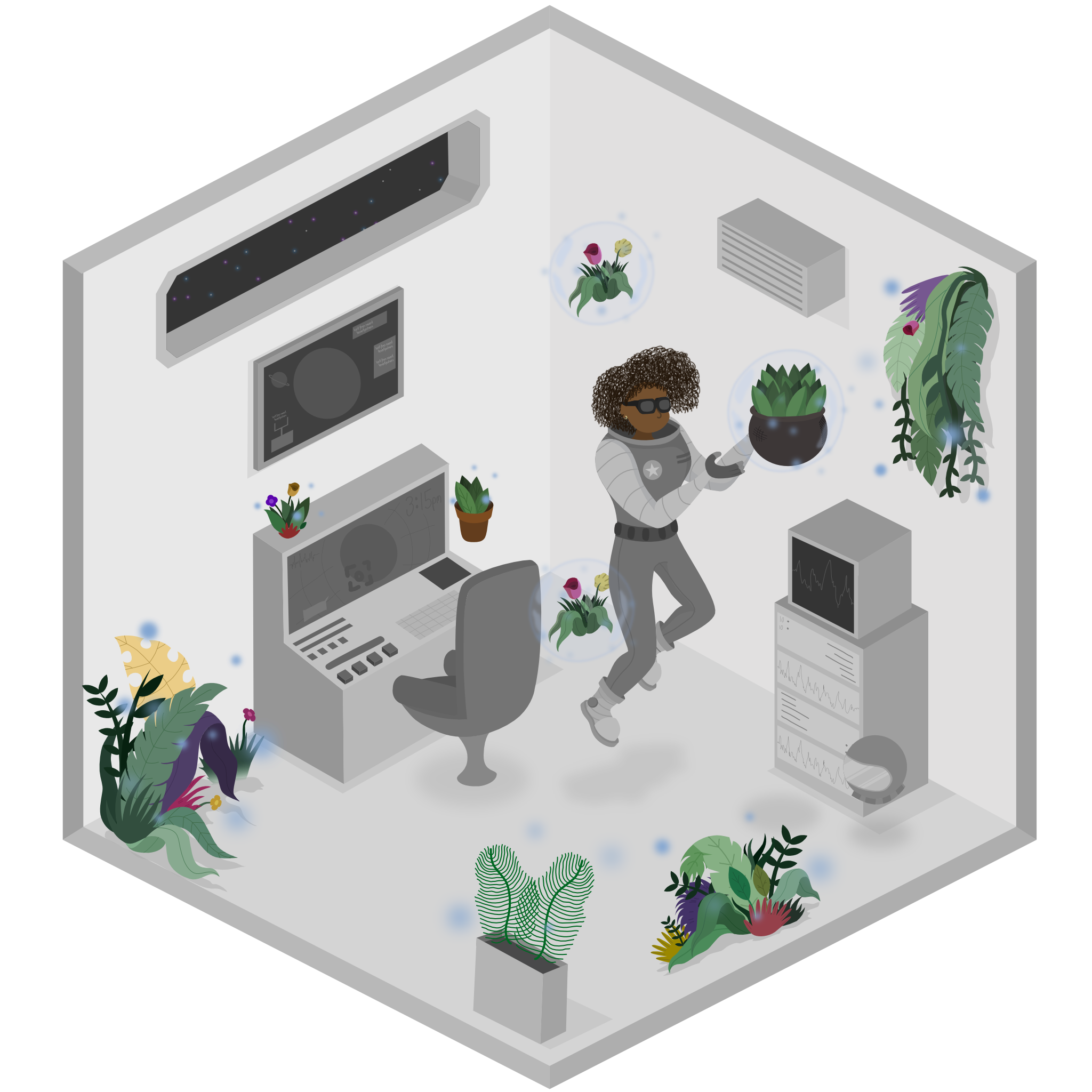 An astronaut who has been in space for 6 months using Vivarium to nurture her plants.
A student in a tiny apartment using Vivarium in a future scenario where climate change has made it hard to interact with nature and grow certain plants. 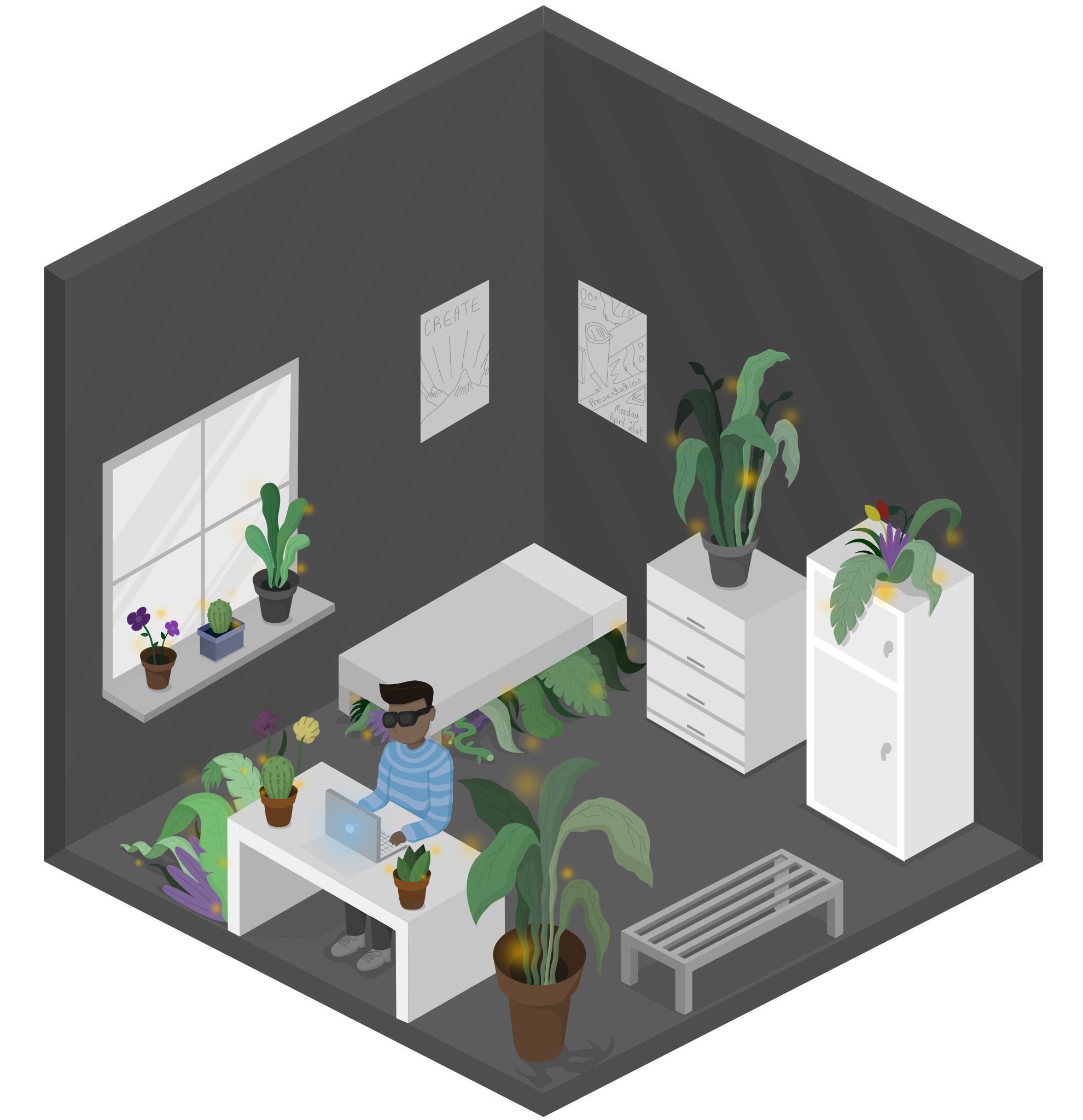 This was my first Augmented Reality project and I learnt a lot about designing for a space via this project. Though there are certain technical limitations with the current AR technology, I am very positive about its future and how it can help create powerful immersive experiences. Some of thoughts on things I think I could improve and possible future steps:

As we practice social isolation in this new normal, I have realized that my project could be beneficial to a lot of people that are avoiding leaving their houses and people who are immunodeficient and immunocompromised. I decided to take this up as a side project and make this a product that people can use. I have started tinkering with Unity AR Foundation and ARKit to create an AR app that I plan to release on iOS.